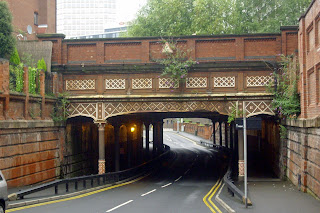 The structure is completely hidden from the canal, with high walls blocking any view and from below it looks remarkably like a railway bridge, being too long for a normal aqueduct. 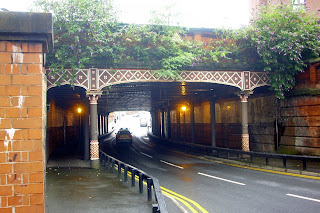 The ironwork is very ornate and has been refurbished in recent tears, with sympathetic Victorian style street lights installed to dispel some of the gloom beneath, hopefully rendering pedestrian traffic safer in so doing. 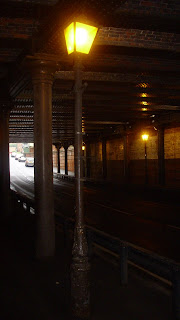 All photos are from the Captian's own collection

River Trent Aqueduct(s) - Great Haywood
Staffs and Worcester Canal
I just knew what this one would look like before I wormed my way around the end of the balustrade and down onto the adjoining field. 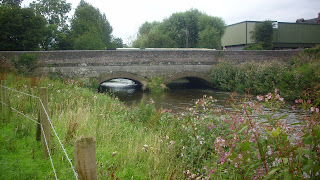 It's a Brindley canal so it had to be a low slung heavy masonry aqueduct with multiple arches to accommodate the erratic water flows of the upper River Trent. Whilst it isn't immediately apparent, this aqueduct has four arches, with the outer two largely obscured by vegitation. 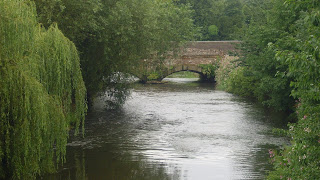 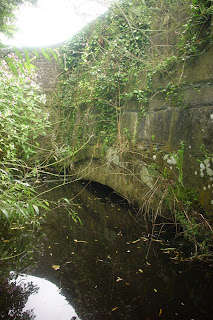 At Great Haywood there is not one aqueduct but two. Very close to the main river aqueduct there is a second narrows which carries the canal over a single arched aqueduct beneath which lies the remains of the old millstream. The mill building remains, but the pools, weirs and streams have all been built over and from the upstream side only a sliver of water is visible behind a security fence. 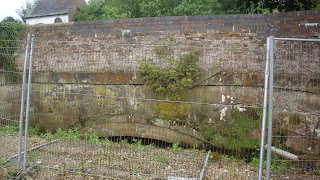 All photos are from the Captians personal collection - July 09

I was sitting at the foot of Deptmore Lock, reading a copy of Canals and Rivers (thin on content) waiting for an oncoming boat to pass through when I saw it. A low brick wall beside me, so I hopped off the stern and leaned over for a look.

Bingo - an aqueduct. So I hauled myself over the fence and slithered over a very muddy meadow to get a photo. 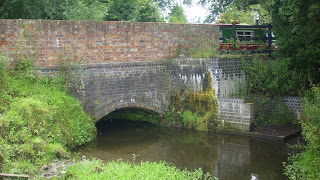 Photo is from the Captian's personal collection - July 09

I am not sure I should really include this as an aqueduct as it is more of a culvert really and passable only with the aid of an aqualung. However, it is interesting because it carries a flowing stream the surface of which is below the surface of the canal but higher than the canal bed. The solution appears to have been to create a U shaped sump with a fairly large brick arch into which the water flows on the western side and then wells up again on he east.

It's a good job this structure was well made because it must be the devils own job to fix or repair. I suspect that this structure has been quietly going about its business for over 200 years.

I wonder what BW would do if it got blocked - call in Dyno-Rod?

A listed structure, completed in 1799 which continues to carry the Walsall Canal, now reduced to a barely navigable ditch. 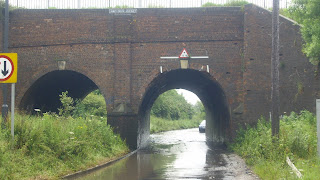 I have a particular affection for aqueducts which carry canals over water. Strictly speaking this is a road aqueduct, and probably a defunct railway line (now a footpath). However, at the time of my visit the heavens had opened all night and the road was completely flooded.

Boy racers were making the most of the flood, driving through a massive speed and throwing up a huge splash - or maybe they were trying to soak the mad twonk who was trying to take photos.... who knows! 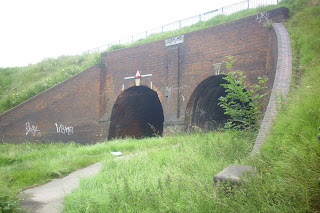 Not a common view of this aqueduct, the only one on the Walsall canal, but interesting none the less. The twin brick arches are unique to the region. 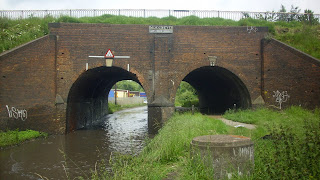 All photos are from the captain's own collection - June 09