Ynysbwllog Aqueduct
Neath and Tennant Canal
12th December 2009
The isolated Neath and Tennant Canal system extends about 21 miles, following the Neath Valley north east from Swansea in South Wales. The canal has been abandoned since the 1920's and subject to on and off restoration attempts since 1974.
The navigation has a number of distinct engineering obstacles, including three significant aqueducts.
I am indebted to Martin Ludgate of Canal Boat (Jan 2010) for highlighting the restoration of the .
Ynysbwllog Aqueduct in 2008. This aqueduct used to be a multi arched stone structure, which ultimately failed but as the waterway still serves a function in delivering fresh water to the area, it was replaced with two large iron pipes spanning the gap.

Ynysbwllog Aqueduct in its piped state (Photo: NPT.Gov.uk)
This water delivery function has been the Neath and Tennant's salvation and when the pipes were replaced it was with a new steel trough built to navigable dimensions.

Low level river crossings like this represent a problem for drainage. In normal conditions the water capacity beneath their arches is adequate, but in times of exceptional flooding, water can be ponded back and threaten the integrity of the aqueduct, and represent a danger to the area beneath it in the event of a catastrophic failure.
The new slimline trough overcomes this problem by maximising the flow capacity beneath its single wide span and, in times of emergency, it should be robust enough to survive floodwaters running over the top as well.

And another old photo of this site in its unreconstructed days provided by Jim of nb Starcross taken in the 1970's: 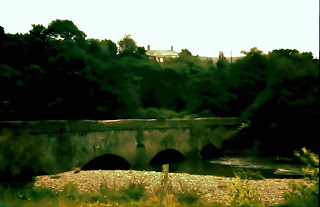 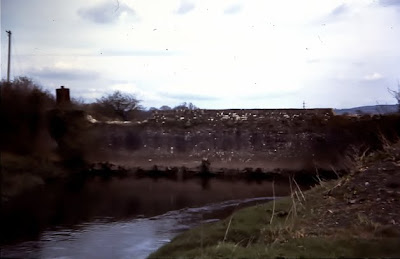 River Gwendreath Aqueduct
These long winter months offer little scope for collecting new aqueducts, but my friends out there know of my interest and from time to time they post a photo for my collection.
So, today I was delighted to spy a photo by Jim of nb Starcross, taken in 1972 and no doubt one of his recent transparency conversions.
The image is of the aqueduct over the River Gwendereath  Gwendraeth (sorry Jim - I'm not good at Welsh names), constructed in 1815 to carry the Kidwelly and Llanelly Canal, a later extension of the earlier Kymers Canal (1766) in West Wales.
These are probably some of the finest aqueduct photo's in my collection, not because of their photographic quality or for the brilliance of the construction, more for their utter obscurity.
Without friends like Jim I dont see how I would ever stumble across aqueducts like this one.
For a fuller history click on the above link to the Starcross blogsite.
Posted by Andy Tidy at 20:10 2 comments: