An unassuming stone aqueduct built by John Rennie in 1797, carrying the Lancaster Canal over the River Brock. 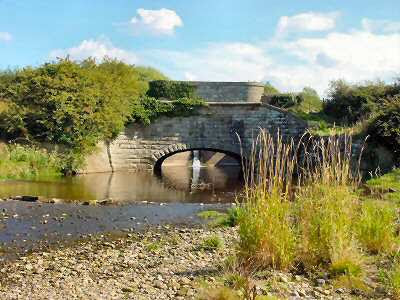 The waterfall in the background is present because the river level had to be lowered to provide clearance for the canal - without resorting to a sump aqueduct.
Posted by Andy Tidy at 22:54 No comments:

They don't come any more obscure than this. 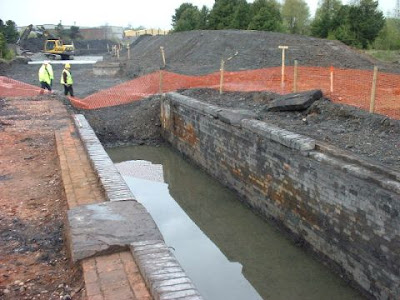 Hawkins Basin Aqueduct was a structure built to carry an arm of the Hatherton Branch Canal over Wyrley Brook and into a substantial basin. 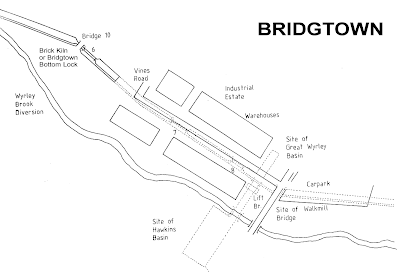 Whilst the aqueduct looks fairly unremarkable, the key feature is that it no longer exists, not even a little bit. This structure at Bridgtown was lost as part of the M6 Toll construction and all that remains is a photo of its channel during demolition, and a plan of it's site contained on the Lichfield and Hatherton Canal Restoration Trust website.

This aqueduct stood at the far end of the Wednesbury Old Canal, carrying the cut over the course of the GWR line into its terminus at a basin near Hill Top. 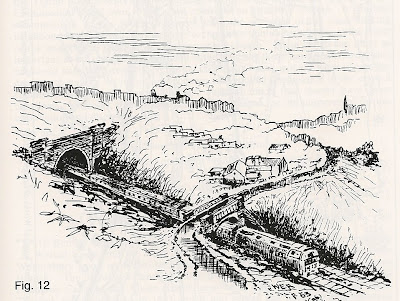 Whilst the canal was built in 1769 as part of Brindleys first phase, the aqueduct would not have been built until about 1858, when the railway and its associated tunnel were constructed across it's line.

Reference documents suggest that photographs exist of this structure, which was still in place as recently in the 1973, several years after the canal's closure in 1954. In the absence of a photo I include a drawing made by Eric Richardson as found in his highly informative booklet "In Search of the Lost Canals of the Black Country". 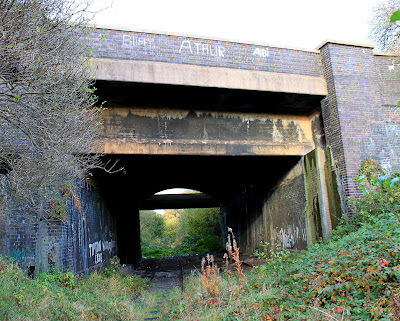 A scramble down the overgrown embankment reveals just the west face of the aqueduct, the eastern side being incorporated into the adjoining railway bridge, which carries the Birmingham to Wolverhampton mainline railway.

The remote location with rusting rails emerging from the undergrowth, only to disappear into more of the same has more than a little 'Fried Green Tomatoes' about it.
Posted by Andy Tidy at 07:00 No comments: