Wolverton (or Cosgrove) Aqueduct
Grand Union Canal
21st August 2009
The Wolverton Aqueduct is something of a late entrant to the world of canal aqueducts, hence its iron construction rather than the more common stone / brick. The aqueduct carries the Grand Union Canal (or the Grand Junction Canal as it was then known) over the Great Ouse. 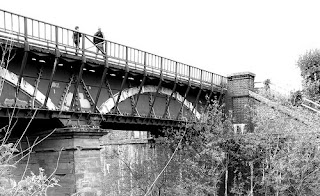 Photo courtesy of Jay Tilston
Know locally as the "Iron Trunk" this structure was built between 1809 and 1811 by Benjamin Bevin to replace an earlier William Jessop aqueduct, which consisted of a wooden trough supported on brick piers. This older aqueduct collapsed in 1808 and its base piers can still be seen.

This replacement trough was cast at Ketley Ironworks in 18 sections ,with side plates bolted on at varying angles. The towpath is cantilevered out from the trough riding 35"' 6" above the river.

I seem to remember reading that a tremporary flight of locks was built down to the Ouse whilst the new aqueduct was built - but I may be wrong? 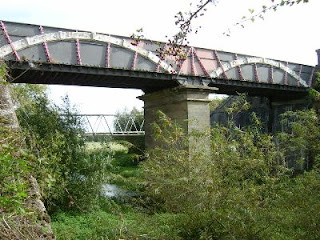 This area could soon be the scene of further change, as and when the long awaited Fens Link to is built along the course of the Ouse, expanding the cruising scope for widebeamed craft.
Posted by Andy Tidy at 23:07 No comments:

Teme and Rea Aqueducts
Stourport and Leominster Canal
21st August 2009
A walk along the line of the long abandoned Leominster Canal will yield two substantial brick aqueducts which are all the more glorious for their delicious state of disrepair. 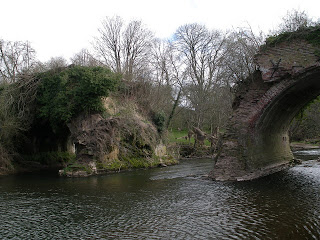 Strictly speaking this is the Stourport and Leominster Canal but in reality its waters never came close to merging with those of the River Servern at Stourport, its planned terminus. This underfunded and ill conceived waterway was started in 1791 and, after much stopping and starting, struggled west from Leominster for 18.5 miles, falling 12.5 miles short of its target. The channel was dewatered in 1851, its limited traffic poached by the newfangled railway network.

Along it's route the canal crossed the rivers Rea and Teme which was achieved on a couple of rather fine brick span arches. 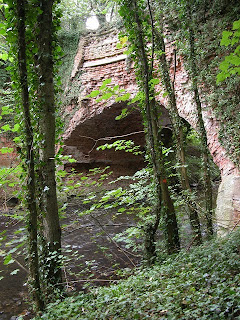 At first glance the Rea aqueduct looks OK, but its 150 years of abandonment have not treated it kindly with much of one face now collapsed into the river below. The structure is now so unstable that even the footpath over it has been closed - not that that stops determined explorers. 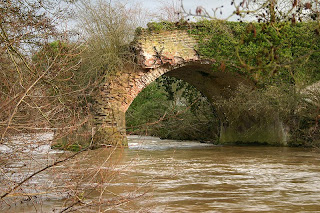 The Teme aqueduct has suffered an even more brutal fate, with one arch deliberately destroyed as part of an army training exercise in the second world war.
Posted by Andy Tidy at 22:33 No comments:

Royal Gunpowder Factory, Walthan Abbey
Lee and Stort Navigation
The trouble with this interest in aqueducts is that I end up finding out about some really interesting stuff, but which isn't actually about the subject in hand. Luckily my main blog, Captain Ahab's Watery Tales provides scope for elaboration, so if you want to know a bit more about this strange site I would suggest that you click across and take a look.
The Royal Gunpowder factory site extended to 10 miles of navigable canal used to transport explosives either in the form of raw materials or as finished product. Locks mean bumps and bumps could mean bangs - very big bangs. The site was therefore constructed on only two levels and spanned the River Lee on four occasions. 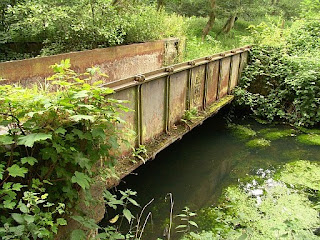 The first two aqueducts were very fine affairs, built in the early stages of the development on the site in 1878/9. These sturdy aqueducts were prefabricated off site as three huge slabs of cast iron, floated into place and then riveted into a single trough in situ. Only one of these aqueduct remains, but it stands in remarkably good condition, complete with a very impressive embossed royal insignia.
A third less elaborate aqueduct was added in 1904, near Newtons Pool. Much of this aqueduct remains save one end of where its base place was smashed out when two huge nitro glycerine explosions occurred in 1940. 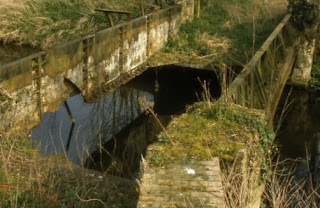 The in house canal network operated until the 1940's when a last, and very utilitarian aqueduct was built to link up to a new mixing house. Newer is not always better and this structure, a simple concrete channel sat atop a row of concrete pipes has long since vanished.

Whilst the aqueducts are not cutting edge technology, their location is very interesting and the fact that the site contains three of only 26 cast iron aqueduct built on the UK makes this holy ground for ardent aqueduct hunters!

26, hmm. Thats quite a big number. I wonder where all the rest are? More hunting needed.

The photos are courtesy of www.londoncanals.co.uk 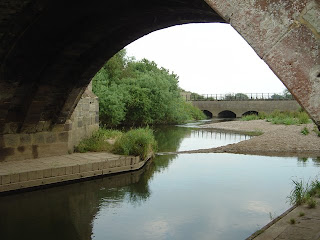 From a design point of view the aqueduct is interesting. The limited clearance between the bottom of the water channel and the normal surface level provided no scope for high arches, which are needed to cope with the significant volumes of flood water which need to pass under it from time to time. 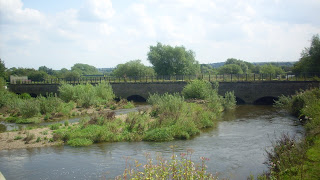 As Brindley was unable to provide the capacity by using high arches he compensated by extending the length of the aqueduct and in so doing increasing the number of smaller watercourses available to eleven. 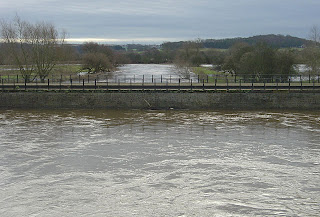 Judging by the above picture of the aqueduct when the Dove is in flood, the end result is barely enough. Having said that, the aqueduct has stood for 240 years! The need to withstand the huge lateral forces of the river in flood probably accounts for the wider than expected water channel and margins. 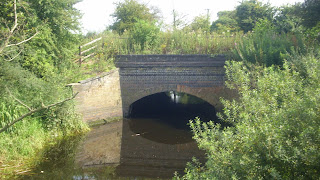 By way of a bonus there is an extra arch just to the east of the main aqueduct, which could probably be seen as a separate aqueduct. However, as it merely carries a small side stream of the river Dove I am including it on the same page. If this single arch has a unique name please let me know and I will afford it a page all of its own!
Posted by Andy Tidy at 19:30 No comments:

River Rea Aqueduct - Kings Norton
Worcester Birmingham Canal
One of the more inaccessible aqueducts, impossible to the east and b****y difficult from the west! 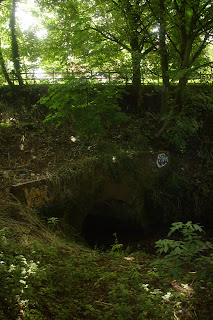 I slithered down a slippery clay bank and only avoided falling into the river courtesy of a conveniently overhanging sycamore tree. Now I know how relieves Zacchieus felt when he was bursting at the seams with enthusiasm to see Jesus come walking past! 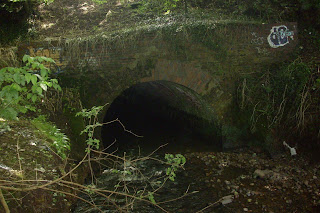 The lighting conditions were a nightmare, in deep gloom from a heavy canopy of leaved with a searing blasts of light from the top of the embankment. I really must get a better camera.

Both photos (poor though they are) are from the captain's own collection. 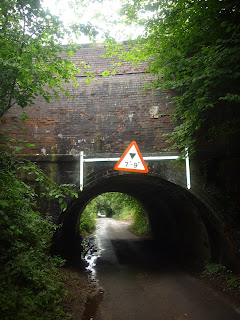 This dripping and dank brick aqueduct carries the canal over Aqueduct Lane, but woe betide anyone who tries to pass through in anything larger than a Ford Transit. 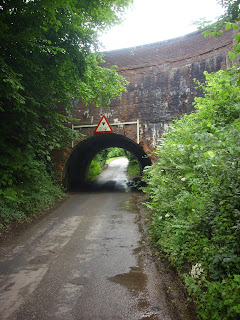 Both photos are from the Captain's own collection

Immediately after the aqueduct there is a particularly lovely house with extensive moorings, one which I would love to own save its one huge drawback (and its not the diminutive size of the access tunnel). The M42 runs on an elevated section only a few hundred yards to the south and the roar of traffic is incessant.
Posted by Andy Tidy at 08:31 No comments: 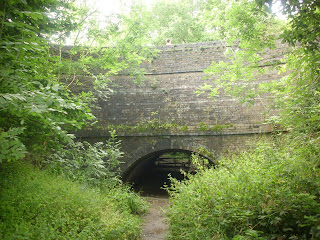 A remote aqueduct which carries the Worcester Birmingham Canal over a muddy footpath just south of Alvechurch.
The scale of the archway would suggest that it carried something more significant than a footpath, but the absence of a stream and the limited headroom for a train makes its original purpose something of a puzzle. GIven its similarity to its near neighbour at Aqueduct Lane, maybe it provided access to a quarry or something. 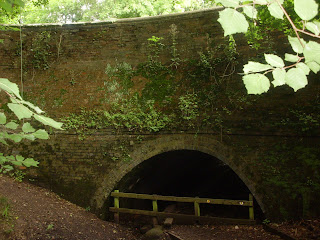 Both photos are from the Captian's own collection

Wolverley Aqueduct
Staffs and Worcester Canal
I include this aqueduct mainly to illustrate the point where I feel that an aqueduct is no longer an aqueduct, but that depends on the weather! 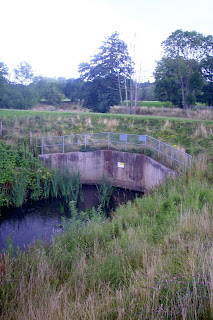 This aqueduct carries the Staffs and Worcester canal over a tributary of the Stour, just north of Kidderminster. In dry weather the channel is visible but at the time of my visit we were in the middle of a very wet spell (aka any British summer) it was completely submerged and operating as a sump.
Do you see my dilemma? It's not just the nature of a structure that makes it an aqueduct, it also depends on the flow of water beneath. Maybe a need a category called "seasonal aqueducts", but that's getting silly!
Posted by Andy Tidy at 07:59 No comments: 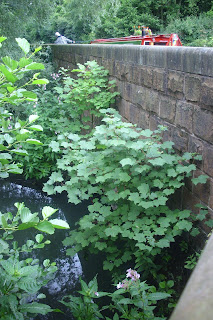 Its confusing to have two aqueducts called the same thing, but its a fact that the Staffs and Worcester Canal passes over the River Stour twice. Firstly just north of Stourton on the confluence of the diminutive River Stour and Smestow Brook. 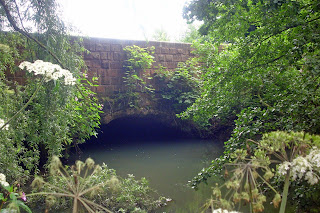 Photos from the Captain's own collection

The single arch span is typical of Brindleys "lowslung and chunky" design. Getting a good perspective on it is very difficult for the western perspective in the summer due to the vegitation, and the eastern side looked like an impossibility.
The second Stour Aqueduct is about eight miles downstream in Kidderminster, where a much more substantial Stour crosses back to the eastern side of the canal.
Posted by Andy Tidy at 07:46 2 comments: